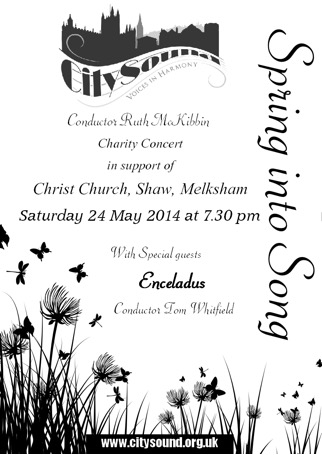 Take a listen to CitySound Voices:

Enceladus is a small Chamber Choir which performs regularly in and around the Bath area.  Founded by its conductor, Tom Whitfield, the choir consists of 12 members, all of whom are professional musicians.  The experience and commitment of the singers allows the choir to concentrate on musical interpretation to capture not only the notes of the music, but also its meaning.

The choir performs an eclectic range of music and tries to encompass every genre of music in its repertoire. Baroque Masses, classical Requiems, African-American spirituals, modern Minimalism and even Disney tunes have all been present in previous concerts.  Our current focus has been on late Romanticism and early Modernism, giving us the chance to perform works from composers such as Debussey, Finzi, Whitacre and Stainer.