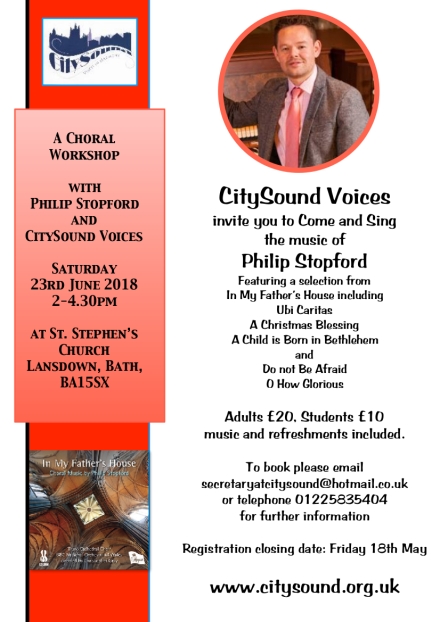 Stopford, whose music is loved and performed by many choirs, led choir members from CitySound Voices, the wider Bath area and beyond, giving us the exciting opportunity to meet him in person and perform his music. The event was well attended, with all appreciating Stopford’s wit and humour as well as the wonderful opportunity to sing with him as as conductor.

Stopford is a composer of English sacred choral music as well as a choir director. He is known for accompanied settings of traditional Latin and English hymns and prayer and for contemporary a capella pieces. Three of his works have appeared in the Classic FM Hall of Fame.

Born in 1977, he began his musical career as a member of the choir at Westminster Abbey and graduated in music from Keble College Oxford. He served as a Choral Director of St. Anne’s Cathedral, Belfast and the Director of Ecclesium Professional Choir. Since 2016 he has worked at Christ Church, Bronxville, near New York in the United States.